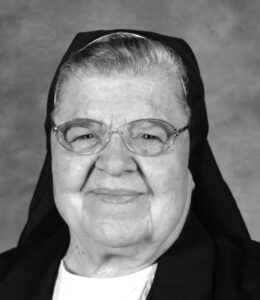 She was the first-born child of Slovakian immigrants, Joseph and Anna Harman Palus, who settled in Johnstown, Pa. The family grew to include five boys and three more girls.

She also studied at Villanova University, Philadelphia for math and Latin; St. Mary’s and Notre Dame University for spiritual theology; and Misericordia College, Scranton, Pa., for canon law and scripture. While in Rome, working at the Archives, she studied theology at the Regina Mundi, Angelicum and Gregorian Universities in Rome, Italy, and Italian at the Dante Alighieri School of Languages.

Over the years, she also served as director of women who were temporarily professed, as local coordinator of community houses, as secretary to the provincial, as a councilor and as provincial of the former Columbia Province.

She also served with others to set the direction for the community’s convergence from three provinces to one U.S. Region in 2000.

She also helped organize retreats in Columbia, served as that former province’s archivist, and prepared books on the Adorers’ history and spirituality. She also attended four general assemblies that worked on the revised Constitution, and was secretary at the first Inter-Assembly Congress in Schaan, Liechtenstein.

She also organized talks and renewal programs for religious congregations of the Harrisburg Diocese in the years after Vatican II.

Sister Emmanuel was preceded in death by her parents, her brothers Charles and Daniel, and her brother-in-law John Burgo. She is survived by her siblings Ann Burgo, Agnes Berger, Mary Corona, and Joseph, all of Johnstown, Pa.; John, of Taylor, Mich. and Bernard, of Pittsburgh; her sister-in-law Patricia Palus, widow of Daniel of Berkeley, Mich.; brother-in-law Joseph Corona; and many nieces and nephews.

Her body will be returned to St. Anne’s Retirement Community at 9 a.m. on Tuesday, Sept. 29 for a prayer service and rosary, followed by visitation until 11:30 a.m., when the funeral Mass will begin, with Fr. Ernie Krantz, CPPS, presiding. Burial will be in the convent cemetery.

Donations in memory of Sister Emmanuel Palus may be sent to the Adorers at 4233 Sulphur Avenue, St. Louis, MO 63109. Or you can donate online today.