Adorers of the Blood of ChristOctober 26, 20168 Comments 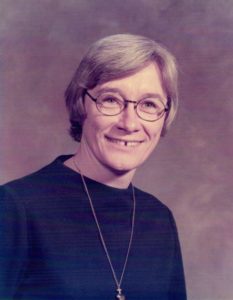 Diane Shirley Kolmer so loved and admired her “soul-mate aunt,” Sister Shirley Kolmer, that she adopted the legal middle name, “Shirley,” when her aunt and four other missionary sisters were killed in Liberia in October 1992.

Now 62, the retired Des Moines, Iowa, lobbyist had grown up admiring and emulating Sister Shirley, whom she described as a “born leader,” a “force of nature” who was “ridiculously smart” and “so damn funny.”

“She was my soul-mate aunt,” she said. “She was who I wanted to be when I grew up. She was the epitome of how to live one’s life.”

As a teenager, Shirley Kolmer left the family farm in southern Illinois for the convent in Ruma, her ticket to an education, a doctorate in math and the world beyond. After teaching at Saint Louis University, she won a Fulbright scholarship to teach young women in Liberia, where she would stay despite a raging civil war until her violent death on Oct. 23, 1992. She and two other Adorers of the Blood of Christ were gunned down that day in front of their convent; two other sisters were ambushed on the road and killed three days earlier. News of the atrocities didn’t reach the U.S. until Oct. 31.

The terrible news came that morning, a Saturday, and Diane Kolmer had slept in. She remembers her husband saying, “Your dad’s on the phone.”

“We knew they had been missing,” she recalled. “We were waiting on word.

“He proceeded to tell me. He said they were all gone. As I stood in the kitchen, I sank to the floor. I thought, ‘who did this?’

“Just as I hit the floor, I simultaneously realized it did not matter who killed her and them. I felt a sensation of water flowing backwards over my head and heard the words ‘forgive them.’

“I felt (my aunt) holding my head up and back and looking in my eyes to tell me she was all right and to ‘let it go.’ She was surrounded by white light as she laid me on the floor and when I blinked her presence, her energy was gone. It seems like it happened yesterday.”

Diane Kolmer said that she was able to “pretty much let it go,” but as a political junkie, she wonders how the killings affected politics in Liberia. “People know who did it,” she said. “Politically, there’s no stomach to pursue it, but I don’t know why not.”

Diane Kolmer said her aunt was very good at making things happen or getting herself out of a bad situation. “The fact that she could not talk her way out of this (final episode) means there was no way out,” she said.

Their final time together was when Diane had come to St. Louis on business in November 1991, almost a year before the massacre. Sister Shirley was in the U.S., on a break from the chaos in Liberia, and she and her sibling, Diane’s other beloved aunt, Sister Elizabeth Kolmer, joined Diane for a night out.

“We had dinner, some beers and told lies to each other,” she recalled fondly. “I’ve never laughed so hard.

“They were such strong, bright women doing what they thought they should be doing.”

If Sister Shirley was alive today, her niece said “she’d make sure the kids of Liberia graduated from high school, and if they wanted to go to college, she’d help them find a way.”

8 thoughts on “Remembering a ‘Soul-Mate Aunt’”