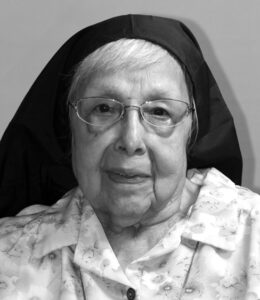 Sister Angelita baptized Josephine, earned a bachelor’s degree in education at Sacred Heart College (now Newman University) in Wichita in 1960. She earned two degrees from Wichita State University, a master’s degree in Spanish and a Specialist in Language degree.

She taught elementary students, her “the dear little ones,” for about 15 years. She taught Spanish at Newman University for another 15 years. Her bilingual English/Spanish abilities were welcomed in parish ministry, as a sponsor of ASC associates and director of religious education.

She was eager to help undocumented people with the paperwork needed to become citizens in Elkhart, Kan., and Loving, N.M. She visited tornado survivors in Saragosa, Texas as a Catholic Church Extension Society team member. She also served as her mother’s caregiver for a year and translated biographies of St. Maria De Mattias, Sr. Clementine Zerr, and Sr. Seraphina Cinque into Spanish.

In 2008, Sr. Angelita retired to the ASC Wichita Center, and three years later, to Caritas in the Center.

Donations in memory of Sister Angelita Alfaro may be sent to the Adorers at 4233 Sulphur Avenue, St. Louis, MO 63109. Or you can donate online today.