March to Montgomery: A Sister Remembers

Adorers of the Blood of ChristMarch 25, 20153 Comments

On this day, March 25, in 1965, five Adorers of the Blood of Christ from Ruma, Ill., joined thousands of civil-rights demonstrators in the last leg of the march from Selma to the Alabama State Capitol in Montgomery, Ala., all in the name of racial justice and voting rights for African Americans.

For ten to twelve blocks we marched through friendly, Negro areas. We sang and waved and smiled. The Negroes lining the streets and standing on their porches joined us, some singing, some waving, all smiling. These were our brothers to whom we had come to give courage and strength in their hour of need. Would there be repercussions? We wondered and hoped and prayed that no harm would come to them because of us.

We had been told that we would march through three sections of town enroute to the Capitol: A Negro residential section, a white residential area and the downtown business section. We had been warned to be extremely careful in the last two areas. 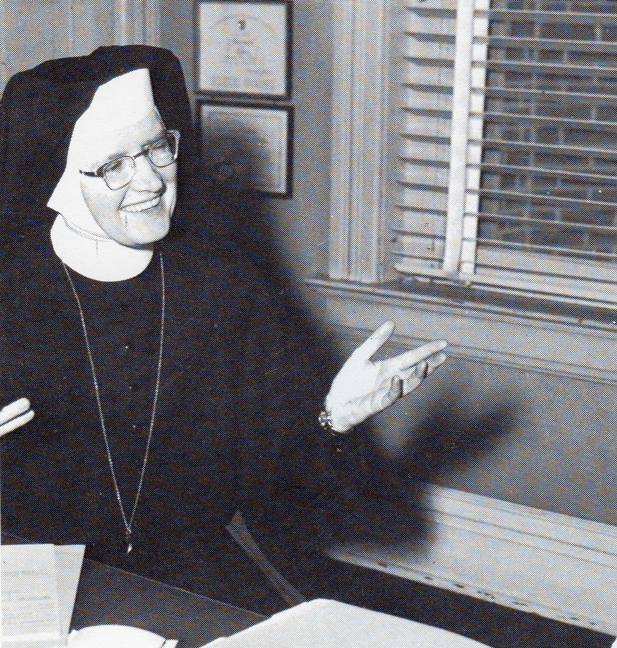 As we came into the white residential section, there were no smiles, no waving of hands, even our songs died on our lips. Every few blocks someone would say, “Let’s sing;” and we’d try again for a short time. A chill wave of hostility and resentment seemed to permeate the street despite the 80 degree temperature. As we looked at the lines of silent spectators on their porches or behind closed windows, we tried to understand their problems and their thoughts. To them we were a group of agitators from the North, fomenting the Negroes to rebellion even as some of our ancestors had done in post-Civil War days.

When one man flaunted the Confederate flag in our faces, we took up “The Star Spangled Banner” with a gusto and waved our small flags as we passed on. The armed soldiers must have been thinking, “If it weren’t for these intruders, we wouldn’t be federalized. We’d be back in our home towns in Alabama and back at our jobs”

We tried to understand as we looked at them row after row standing solidly with legs apart, right hands on their guns, left hands against their backs. Occasionally someone would turn and say, “Look back. It’s fantastic.” As far as one could see behind us there were people marching.

On the way a Negro gentleman in front of us, carrying his transistor, reported periodically on the local news. There were already 15,000 massed at the Capitol. The conservative estimates heard on all newscasts that night was that 25,000 people had marched.

At about 1 p.m., we suddenly saw the dome of the Capitol in the distance. Immediately our delegation broke into “Glory, Glory, Halleluia” as we strode along, very quickly, down Montgomery Street hill.

Half a block from the Capitol, the loudspeakers began to blare out instructions. ”Sit down in the street. Sit down right where you are.” As we turned to obey instructions, a Negro minister handed me his raincoat to sit on, but I declined. What was a little Dexter Street dirt in comparison with all that had gone before, all that was still to come for these poor people?

The Rev. Dr. King spoke for more than 30 minutes, gently urging his people “that non-violence must be the guiding principle at all times,” but that “we will not let Alabama return to the normalcy of discrimination.”

As we stepped over and around the people, hands shot out to grasp ours and faces lifted to greet us softly with “God bless you, Sistah” and “Thank you for coming.”

As we rode out of the town passing first the business section, then the area of southern mansions which we had not seen in the morning’s march, then the St. Jude Compound with its quota of poor little shacks and squalid huts, we felt a sense of defeat and discouragement. What had we accomplished? True, we had followed instructions to the letter. The tactics of non-violence” had been our guiding principles. There had been no incidents–as yet. A bullet was to be fired, but that was five hours away. The negroes had appreciated our coming. They had let us feel their gratitude. But the smiling, cheering groups were offset by the rows and rows of cold, silently staring white Montgomery citizens and by the equally stolid rows of guardsmen.

We had one and one-half hours of icy highway to negotiate but at 8:15 we reached our warm convent. The Sisters greeted us with affectionate concern. We were home again. For a brief 12 hours, we had mingled with our brothers of another race and other creeds. We had made ourselves one with the insults and the coldness of the ghetto of the South for one short day. But then we were out of it, back to our clean sheets, warm food and comfortable convent life. For the Negro people of Alabama, it was no one-day commitment. It was their life.

3 thoughts on “March to Montgomery: A Sister Remembers”