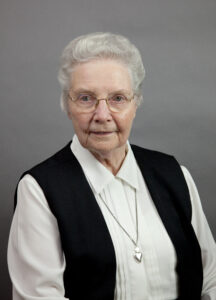 Sister Clara Ternes, ASC, a former hospital executive who taught medical ethics, died Sunday, Nov. 27, 2016 at the Ruma (Ill.) Center. She was 88 years old and had been an Adorer of the Blood of Christ for 72 years.

Sr. Clara earned her degree in nursing from St. John’s Hospital School of Nursing, Springfield, Ill., in 1949 and certification as a registered nurse anesthetist from St. Francis Hospital, Peoria, Ill., in 1952. She earned a bachelor’s in theology with an emphasis on medical ethics from Saint Louis University in 1974, and her master’s in theology from Catholic Theological Union, Chicago, in 1976. Her thesis became the textbook, Medicine, Morals and the Nurse.

While working full time, she also volunteered 3,500 hours of service in religious ministry and patient activities at the Houston Veterans Administration Medical Center, which honored her for her service.

Sr. Clara’s last ministry was as vice president of mission, values and ethics for nearly two decades for the Southern Illinois Health System in Carbondale. She believed that nurses had a moral responsibility to assert themselves in ethical dilemmas. Since nurses care for patients 24 hours a day, “they are able to ascertain what the patient’s desires are and should play a role in making the final decision, along with the doctor, patient, family and chaplain,” she said. The medical ethics courses she presented were designed “to give nurses a framework with which they can make ethical decisions.”

She is survived by nieces, nephews and members of the ASC community.

Donations in memory of Sister Clara Ternes may be sent to the Adorers at 4233 Sulphur Avenue, St. Louis, MO 63109. Or you can donate online today.