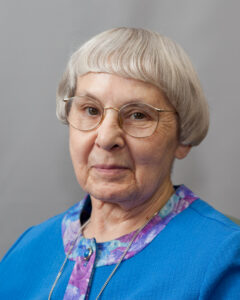 Sister Elizabeth Ann Schmidt, ASC, died Tuesday, Nov. 22, 2016 at the Wichita Center. She was 85 and had lived 69 years as an Adorer of the Blood of Christ.

She was born Feb. 19, 1931, the fifth of 10 children of Marcus and Mary (Suppes) Schmidt, and grew up on the family farm outside of Spearville, Kan.

Influenced by her teachers, the Adorers, at St. John the Baptist elementary school, she entered the ASC community in 1945, at age 14. She pronounced first vows July 1, 1947.

A last-minute assignment to substitute teach for an ailing sister caused her to put her own high school education on hold. Another sister tutored her and she graduated from Sacred Heart Academy in 1950. She professed final vows on July 1, 1952.

She retired to the Wichita Center in 2006 and moved into Caritas Center in May, 2014.

Preceding her in death were her parents, her brothers John, Richard, Leroy, Arnold, and her sisters Alice, Evelyn, and Delphine, ASC. She is survived by her brother Joe, her sister Marjorie, many nieces and nephews, and her ASC community members.

The Mass of Resurrection for Sister Elizabeth Ann will be celebrated at 10:30 a.m. Monday, Nov. 28 with Fr. Tom Welk, CPPS, presiding.

Donations in her honor made be made online by clicking here, or by check sent to the Adorers of the Blood of Christ, U.S. Region Mission Center, 4233 Sulphur Ave., St. Louis, Mo. 63109.

Donations in memory of Sister Elizabeth Ann Schmidt may be sent to the Adorers at 4233 Sulphur Avenue, St. Louis, MO 63109. Or you can donate online today.