Adorers of the Blood of ChristFebruary 5, 2015

Recently I began reading the annals of the Catholic Children’s Home in Alton, Ill., where many Adorers, including myself, ministered in various capacities and lengths of time over the years. Adorers began caring for orphans in 1879 in Piopolis, Ill. At that time, the southernmost part of Illinois was the Alton Diocese with Right Rev. Peter Joseph Baltes the bishop. He was concerned about and encouraged care for the parentless children of the diocese.

Cecilia Gerber came from Germany in 1876, at the age of 24, to become an Adorer. Earlier in Germany, she had cared for an orphaned cousin. In 1879, she was assigned to care for the orphaned children in the Piopolis area. Four years later, Bishop Baltes had the 18 orphans from both the Pio Nono Orphan Asylum in Piopolis and the St. Aloysius Orphan Asylum in Quincy, Ill., moved to Prospect Street in Alton, a block west of the cathedral. The Adorers were asked to administer the orphanage and Mother Cecilia moved with the children and cared for them until 1907.

In 1959, Sr. M. Laura Goeckner was assigned to minister in the Catholic Children’s Home kitchen. Our congregation’s Foundation Day on March 4 had added significance at the home. It was also the name day of Father Andruskevitch, affectionately known as Fr. Andy.

The celebration usually began the evening before with a performance by the school children. (The home operated a kindergarten-through-8th-grade school.) The next day would begin with a sung High Mass, festive meals, movie and, best of all, no school.

That year, Sr. M. Laura baked and assembled a cake in the shape of a Cadillac modeled after the one Fr. Andy drove.

The annals tell the story:

“At 1:30 p.m., we had the dress rehearsal for Father Andy’s name day program. At 7:30 p.m., we had the real performance for Fr. Andy. The Cadillac car seemed to give Father the most pleasure. Sr. M. Laura spent many hours on the cake so as not to forget any detail. Many pictures of the cake were taken by a baker from Russell-Miller Milling Company. Even the manager of the Cadillac Company was here.” 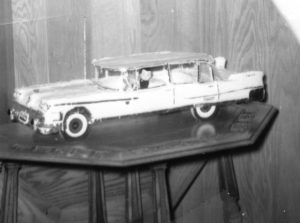 On March 3, 1959, Sr. M. Laura reported that the cake was taken to and displayed at the Cadillac Company. Sr. M. Laura’s next cake-making adventure was one fashioned after a ship. A General Chapter was scheduled for the following summer and M. M. Catherine’s name day celebration was April 28.

“Today Sister Maureen, Sister Isabelle, Sister Genevieve and Sister M. Laura went to Ruma to take Mother M. Catherine’s name day cake to her. Sister M. Laura made a replica of the ship, the U.S.S. Constitution, bearing three sisters. When we got to Ruma, we found out that our delegates were (traveling not by ship, but on) TWA.” 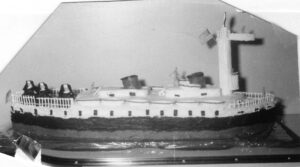 Today, Sr. M. Laura ministers in the quilting room at the Ruma Center where orders for hand-made quilts continue to come in. Seldom is the quilting frame empty for more than a day, if that long. She works side by side with her sisters: Sr. M. Jerome and Sr. Emma, and Sisters Theresa Marie Braun, Celine Burke, Rose Anthony Matthews and lay friends.