What I miss most about Korea

The people. The relationships formed by living, working, struggling, crying, laughing and praying together… that’s what I miss most about Korea.

I spent time with so many different kinds of people during my 36 years ministering in Korea, and they each taught me lessons that broadened my worldview and formed me into the person I am today.

I spent the longest period of time in Korea ministering at Blessed Mother daycare/kindergarten.   My years of teaching previously in the States had been mostly in the middle grades. In Korea, I would look at the first graders and wonder how to talk with them, much less teach them anything. I learned just how trusting children can be even with a tall light hared woman with blue eyes. 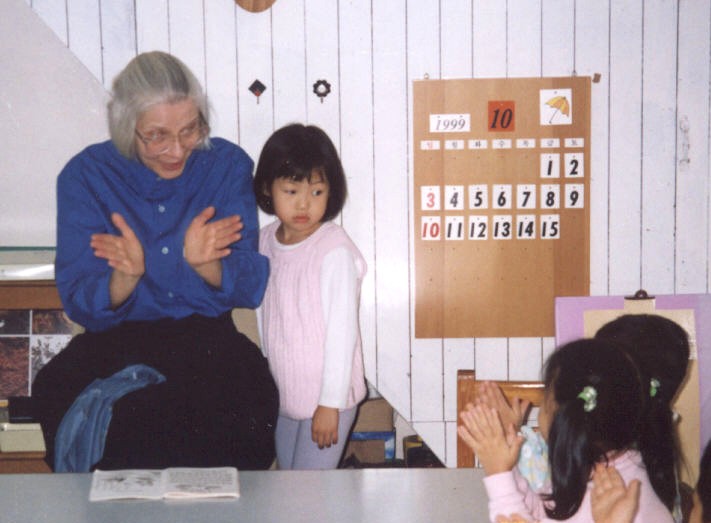 Children at that age are like sponges, absorbing everything they hear and see. They bluntly corrected my Korean pronunciation and perfectly imitated my English. Children understand more than we often give them credit for; not just our words, but also actions, emotions and unspoken expectations.

On the desk I’m writing from is a handmade ceramic mug with a message written in Hangul, the Korean alphabet. Given to me by one of the daycare teachers the day before I left Korea, the message reminds me of the memories we share.  And there are many memories!  The daycare the teachers were a model and inspiration to me.  I admired their creativity in teaching, their unending patience with the children and the mountains of energy they spent each day.   Besides the daily classes and play there were monthly field trips, overnight camping at the beach every summer and programs to present to parents.

Those years weren’t all work. One weekend each spring and fall, the teachers and I would pack up and spend the time visiting one of the scenic mountains of Korea. This flatland Kansan enjoyed the beauty, especially the broad vistas from the tip. Over the years we visited many of those mountains. As you can tell, I’ve gotten lost in memories just looking at that ceramic mug.

Blessed Mother Daycare was in a housing project. There were fifty 4-family houses in the project, with all of the families receiving some kind of aid.  The early years of my time in Korea were a time to get to know my neighbors.  This tall light haired foreigner was quite a novelty in that neighborhood. The children were openly curious, wanting to touch my hair.  One year we had more than thirty children in the daycare just from that neighborhood. The curiosity of the older students living in the project was more guarded but still friendly. They wanted to ask questions and to practice English words.

There were many widows in the area and they would gather to chat as they worked, peeling garlic cloves or chestnuts for sake in the markets. They were glad when I joined them and would try to teach me new words and phrases. Consequently, I now speak Korean with an accent from the Masan area of Korea. Listening to their stories was one way to improve my understanding of Korea, and in the process I learned more about the lives of the people and the hardships they had to overcome. 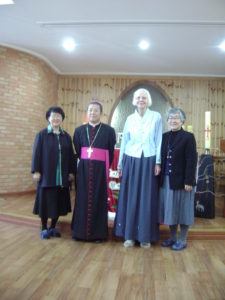 During my later years in Korea I ministered more with the migrant workers. These men and women came from the Philippines, Vietnam, Cambodia, Mongolia and Uzbek to work in the factories of Masan Free Export Zone and the industrial city of Changwon. These workers spent long hours with low pay doing the 3 D jobs; dirty, difficult and dangerous, so they could send money home to their families.  They did not know the language and faced many problems in their situations. Most of them knew my phone number and would call from the doctor’s or dentist’s office for translation. They gathered on Sundays to meet with their friends, to play basketball or soccer and the Catholics and Vietnamese to attend the Eucharist.  Though we were from many different countries and cultures, we all shared the same need for family and friends, for people to listen as we told our stories.

I miss all of these groups. Their lives intermingled with mine on a daily basis. Most of all, however, I miss the Korean Sisters Adorers. I spent the most time and energy with them. They helped me in my early years in Korea to not only learn the language and the dialect of that area of the country, but also to learn the customs and traditions of that very traditional society.  We worked together in forming community and in developing ministries.

During those times there were times of rejoicing, planning and growth as well as times of disagreement, discussions and setbacks. While working through these times we learned to trust each other in the living out of our charism as Sisters Adorers of the Blood of Christ in Korea.

I moved back to the States in the fall of 2013. I don’t interact with as many diverse groups now, causing me to reflect on the great privilege it was to minister among my Korean neighbors, coworkers, and friends.

Yes, I miss them all. But it’s okay to miss. May we each have our hearts full of people we miss often because they have helped us to grow.