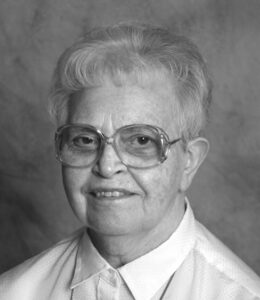 Sister Rose Schrage, ASC, died Saturday, Nov. 14, 2015, at the Ruma Center, Ruma, Ill. She was 86 years old and had been a professed member of the Adorers of the Blood of Christ for 67 years.

Sister Rose was born on Dec. 31, 1928 in St. Rose, Ill., one of eight children born to the late Bernard and Mary (Goestenkors) Schrage.

She also served as a houseparent at the Catholic Children’s Home in Alton, Ill., (1979-81). At DeMattias Hall, the Adorers’ House of Studies in St. Louis, Sr. Rose served briefly as the assistant to the executive housekeeper, then held that position herself for many years; she also became the assistant administrator at DeMattias during her final years there.

For the final 11 years of her active ministry, Sr. Rose served as housekeeping and laundry supervisor at Nazareth Living Center in St. Louis.

Sister Rose earned a bachelor’s degree in history and a master’s in American history, both from Saint Louis University.

When she retired from active ministry, she helped with laundry and ironing at the Ruma Center, and enjoyed reading, walking, crocheting and a good cup of coffee and conversation.

Sister Rose is survived by her brother James (Sandy), nieces, nephews and members of the Adorers of the Blood of Christ.

She was preceded in death by her parents, her brothers Ferdinand, Oscar, Edgar, Bernard, Jr. and Cletus, her sister Marie, and sisters-in-law Ruth, Catherine and Theresa.

Visitation will be from 8 to 10 a.m. on Wednesday, Nov. 18, 2015 in the Ruma Center Chapel. A prayer service will be held at 10, followed by a funeral Mass at 11 with Msgr. Dan Jurek as presider. Burial will follow in the Ruma Center cemetery.

Donations in memory of Sister Rose (Margaret Rose) Schrage may be sent to the Adorers at 4233 Sulphur Avenue, St. Louis, MO 63109. Or you can donate online today.