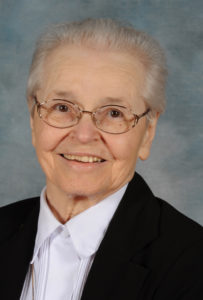 Sister Mary Matthew Janciar, ASC, a teacher and parish minister, died on the Feast of the Epiphany, January 6, 2019 at St. Anne’s Retirement Community in Columbia, Pennsylvania. She was 93.

Bridgit Janciar, the older of two daughters of Slovakian immigrants, Emil and Theresa Janciar, was born November 3, 1925, in Johnstown, Pennsylvania. When her mother became a widow and remarried, Bridgit gained four step-siblings.

She earned a bachelor’s and master’s degree in French from Saint Louis University in 1955 and 1958.

From 1958 to 1979, Sister Mary Matthew taught at St. Joseph Academy and the Precious Blood Teacher Training Institute in Columbia, Pennsylvania, and in 1972, at Lancaster Catholic High School as well. In addition to teaching, Sister Mary Matthew also directed Scholastics from 1973 to 1977.

She also served her community of Adorers throughout the 1970s and ‘80s as local coordinator for the motherhouse and St. Anne’s Home for the Aged, and as provincial councilor.

From 1989 to 1994, Sister Mary Matthew was administrator of Hispanic Ministry at Our Lady of Guadalupe Parish in Lebanon, Pennsylvania, a job she both loved and found challenging. The families she served would later refer to her as their “beloved mother.”

She also served in ministry at St. Francis of Assisi Parish in Harrisburg, Pennsylvania, from 1994 to 2008.

Sister Mary Matthew is survived by a step-brother, Leonard Kuzbel of Middletown, Connecticut; a niece, Karen Kessler, of Pittsburgh, and other nieces and nephews.

Her cremains will be brought Friday morning, January 11, to St. Anne’s Retirement Community, where the ASC Community, family and friends are invited to join in the Rosary in the chapel and a Mass of Christian Burial at 11 a.m. Burial will follow in the convent cemetery.

Donations to the Adorers in Sister Mary Matthew’s memory may be made online at adorers.org or mailed to Adorers of the Blood of Christ, U.S. Region Mission Center, 4233 Sulphur Avenue, St. Louis, Missouri, 63109.

Donations in memory of Sister Mary Matthew Janciar may be sent to the Adorers at 4233 Sulphur Avenue, St. Louis, MO 63109. Or you can donate online today.