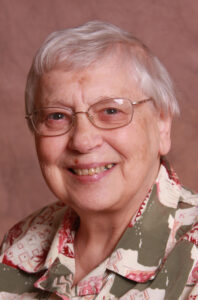 Adorer Who Worked as a Nurse in Illinois Dies

Sister Mary Maurice, ASC was one of eight children born to Joseph and Isabella (Wichmann) Loepker and grew up on the family farm in Bartelso, Ill., where she was taught by Adorers at St. Cecilia School.

At 17, she went to work as a nurse’s aide at the Mother of Good Counsel Home for the Chronically and Incurably Ill in St. Louis and began considering a religious vocation. In 1946, she came to Ruma to complete high school at the former Precious Blood Institute.

She received her nurse’s training at Saint Louis University where she earned a bachelor’s of nursing degree in 1954.

She worked, sometimes as a supervisor, in various departments including obstetrics, medical-surgical, emergency, special care and spiritual care.

She also served her sisters at the Ruma Center over the years, working as a financial assistant, community prayer leader and singer in the choir.  She also loved to send cards and notes and to visit with friends.

A wake service was held Sunday, July 12 followed by a Mass of Resurrection on July 13, both in the Ruma Center Chapel.

The Rev. James Dougherty presided and Sr. Barbara Hudock, U.S. regional leader, gave a reflection. She was buried in the Ruma Center cemetery.

Memorial donations in Sister’s honor may be made by clicking here.

Donations in memory of Sister Maurice Loepker may be sent to the Adorers at 4233 Sulphur Avenue, St. Louis, MO 63109. Or you can donate online today.