My Journey with Cancer, and God

Adorers of the Blood of ChristJuly 7, 20152 Comments 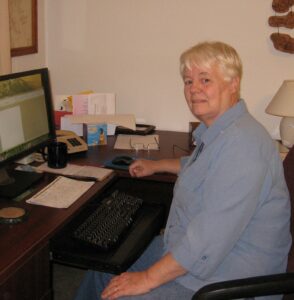 I am Sister Janis Yaekel, ASC and I have pancreatic cancer. In fact, I have lived with cancer since 2012. I hope to share in my blog my journey and my reflections on the presence of God in my life. It is my hope that those who read my entries will find strength for their own journeys.

In February 2012, I had a bladder infection and my doctor wanted a CAT scan to make sure the kidneys were okay. They were fine but the imagery showed something on the pancreas. A subsequent biopsy revealed that I had cancer. I was blown away by the diagnosis yet felt a strong sense of peace at the same time. Instead of asking, “why me?” I found myself saying “why not me?”  Somehow, changing that statement around helped me to know that God would give me the strength to deal with whatever came my way.

As I received my diagnosis, my closest friend in community was dying from cancer, so I had some idea of what I might have to face.  As I walked with her those last couple of weeks, I remember saying to her, “I think that I can beat this cancer, but if I can’t, just know that you have given me a wonderful example of how to deal with it.” We buried my friend on a Saturday and I started chemotherapy the following Monday.

As I began my chemotherapy, I knew I was fortunate to have found the cancer early. This kind of cancer is normally well advanced before symptoms appear. My oncologist told me that pancreatic cancer is the worst kind to have, and that only 20 percent of its victims survive for five years.

I began chemotherapy in March that year and started losing my hair on Palm Sunday. After a few months of unsuccessful chemo treatments, I began radiation treatments along with a different chemo drug. The radiation shrunk the tumor significantly, enough to enable the surgeon to try to remove the cancer surgically. Unfortunately, the initial chemotherapy drugs had severely damaged my liver, forcing me to wait for surgery until the liver healed. Another CAT scan a month later showed no sign of the cancer!

For two years, the cancer did not return, yet the liver did not improve. Then, this past December, the cancer reappeared, and amazingly, the liver had improved. Surgery was scheduled, but later abandoned, after the tumor was found to be located around a main artery deemed inoperable.

Now, I am on chemotherapy again with the intent of holding the cancer in check. The tumor is small and slow growing so I hope that I can have several years of quality life ahead of me.

In my next entry, I’ll share some of the spiritual insights I have had during this journey and some of the gifts that have been given along the way.

Read other entries from Sr. Janis on her journey with cancer.

2 thoughts on “My Journey with Cancer, and God”