My Advent with Central American Refugees

Adorers of the Blood of ChristDecember 14, 20162 Comments

During sabbatical from my education work in Guatemala, I have been volunteering with a group in San Antonio, Texas, that works with immigrants and refugees on the border.

The Refugee and Immigration Center for Education and Legal Services, or RAICES, among other things, provides emergency shelter services to families released from two nearby detention centers for women and children. Those detention centers can hold up to 3,200 refugees who are seeking asylum in the U.S. 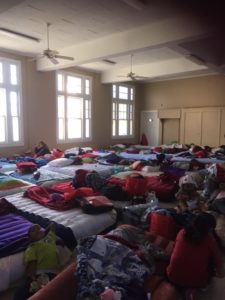 Each night, Casa de Raices provides a bed, a warm meal, a shower and an inviting space for 20 to 30 just-released refugee families. They can take a deep breath before beginning a two-to-three-day bus trip to reunite with family around the United States. These families often have endured months of migration through Central America and Mexico before arriving in the United States where they are held for weeks in a prison-like family detention unit.

Two weeks ago, the numbers of detainees being released skyrocketed, and my volunteer service became a crash course on immigration policies and practices that I never imagined existed.

The first call from U.S. Immigration and Customs Enforcement, also known as ICE, came at 6 p.m. on a Friday. ICE agents said they would bring us 299 women and children for emergency shelter.

Three buses pulled up at 8 p.m., and out walked dozens of women, each wearing an ankle monitoring device, and children, lugging their trash bag suitcases the two blocks to their new temporary home. Thank goodness, a neighboring Mennonite church offered to help and we housed the huge influx there.

At 3 a.m., the last two groups arrived with a message that 96 more would be coming later in the morning. The numbers were overwhelming. The sight of air mattresses set up in every available space made me think that God would surely call this place a house of worship. 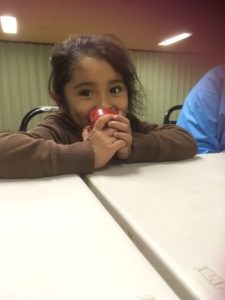 On Saturday, 170 more came. Then, on Sunday, 210 came, the last group arriving at 11:30 p.m. All told, we received and processed 700 women with children over just a few days. Since then, the influx has subsided.

Today, as I was driving to Casa, I listened to the Scripture: “Comfort, give comfort to my people. Tell them their time of sadness is coming to an end.”

We don’t know why the federal government authorized the release of so many detainees in that brief period of time. Mostly, we were just too busy getting them fed, seen by health providers and arranging for their travel to the bus station and airport. We also helped them get oriented to life in the U.S.

It’s been the most impacting Advent I’ve ever known. And I am so proud that the family of Adorers also provided some funds to support the transition of some of these people.

So, all of us in some way, are a part of that “comfort scripture” and hopefully bringing the light that can dispel the darkness of their sadness.

As I listen to that haunting refrain, “O come, O come Emmanuel,” I hear it in a new way, more conscious that God does come in so many ways and places, and today with the face of a very weary woman, three children clinging to her legs and one over-sized trash bag in hand.

2 thoughts on “My Advent with Central American Refugees”