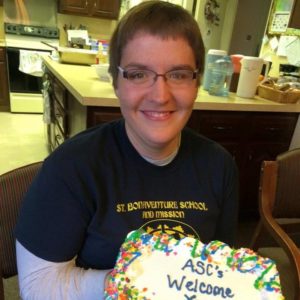 By Kristin Forgotch, candidate for the Adorers of the Blood of Christ

Have you ever wondered why some young women today consider becoming a Catholic sister when they have many possibilities for their life’s work?

I’m one of those young women. Honestly, at the beginning, I was not quite sure either, and it scared me to even think about it.

When the idea of maybe becoming a sister first crossed my mind right before Lent 2014, I thought I would just attend an extra weekend Mass and the idea would go away, but it didn’t.

The idea only grew and I wanted to spend as much time as I could with Jesus and the Eucharist. At that point, I was searching graduate schools and found myself often leaving those web sites and ending up on web sites of congregations of sisters. I was trying to ignore the fact that I was ending up on those sites, but God stepped in and gave me another push in October 2014 in the form of Sister Michelle Woodruff, ASC. She sent me an invitation to get to know the sisters more. At first the invitation scared me, so I hid it in a drawer.

Finally, I decided I would talk to someone about where I thought God was calling me and I was hoping that one simple conversation would make the thoughts and feelings go away.

I had no idea who to talk to, so I invited my parish priest, Father Al Ebach, C.PP.S, over for dinner. He told me that Sister Michelle was a vocation director and would be the perfect place to start. Who knew that a sister in the very rural Navajo reservation in New Mexico would be on a vocation team?

We had our first conversation on the very snowy morning of Jan. 1, 2015 and I have never been more at peace or happier than when I have listened to God and let God take the lead.

So, what draws me to even consider being a sister? God does. So if you are considering that God may be calling you, pray about it and talk to someone.

God already has someone in place to give you direction. I trusted and God led me to my candidate ceremony earlier this month.

I continue to let God lead and be at peace, wherever God leads.