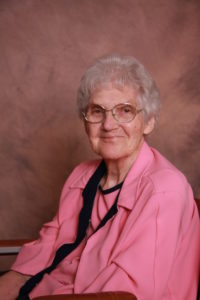 Sister Mary Anthony Mathews, ASC, a longtime educator and missionary in China, died Tuesday, May 8, 2018 at the Ruma Center, Ruma, Illinois. She was 102 years old and had been a professed member of the Adorers of the Blood of Christ for 84 years.
Born on May 1, 1916, in Coulterville, Ill., she was the oldest of 12 children in the family of John and Teresa (Peters) Mathews. She made her first vows on July 2, 1933 and her final profession on July 1, 1938.
In 1940, she and several other sisters were missioned to teach in China, and within a few months were caught in the conflict that escalated into World War II.
The sisters were held in a concentration camp, then lived under house arrest at a Franciscan convent until 1946. They were kept isolated and were not allowed to send or receive letters.
Once back in the states, Sister Mary Anthony studied at Saint Louis University, where she earned a bachelor’s degree in philosophy in 1948 and a master’s degree in education in 1960.
She taught for 35 years, and for 24 of those years, did double duty as school principal.
She taught at the Catholic Children’s Home in Alton, Ill., and the following elementary schools in Illinois: St. Mary in Taylorville, St. John the Baptist in Smithton, St. Elizabeth in East St. Louis, St. Lawrence in Lawrenceville, St. Albert the Great in Fairview Heights, Immaculate Conception in Columbia, St. Joseph in Prairie du Rocher, Holy Family in Cahokia and Immaculate Conception in Centreville. In Missouri, she taught at Our Lady in Festus..
She later taught Adult Basic Education, and GED and remedial instruction.
She also was certified in Clinical Pastoral Education from Saint Louis University.
She became active in the Sanctuary Movement in the 1980s, and cared for refugees housed at Ruma and Assumption Convent in Fairview Heights. She volunteered at La Labor, the Adorers’ mission in Guatemala as a tutor and pastoral minister.
Visitation will be from 8 to 10:45 a.m. in the Ruma Center Chapel on Saturday, May 12, 2018, with a wake service at 10. The funeral liturgy will follow at 11. Burial will be in the Ruma Center Cemetery.
—–
Donations in memory of Sister Mary Anthony Mathews may be sent to the Adorers’ U.S. Region Mission Center, 4233 Sulphur Avenue, St. Louis, MO 63109 or made online.

Donations in memory of Sister Mary Anthony Mathews may be sent to the Adorers at 4233 Sulphur Avenue, St. Louis, MO 63109. Or you can donate online today.