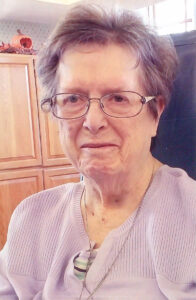 Sister Joan (Mary Leon) Range, ASC, died Thursday, May 7, 2015 at the Ruma (Ill.) Center. She was 83 years old and had been a professed member of the Adorers of the Blood of Christ for 64 years.

Sister Joan was an educator, a leader and a strong proponent for the equality of women. Early in her religious life, she taught elementary school for six years, at St. Andrew in Murphysboro, Ill., Holy Rosary in Fort Dodge, Iowa, and St. Jerome in St. Louis. She taught for three years at Sts. Peter and Paul High School in Waterloo, Ill., and for two years at Precious Blood Institute in Ruma, Ill.

Sister Joan earned her bachelor’s degree in theology in 1959 and her master’s degree in philosophy in 1964, both from Saint Louis University. She earned her doctorate in theology, with a focus on Canon Law, from Fordham University in New York in 1971. She taught theology at Saint Louis University for more than 30 years. During a sabbatical in 1977, she studied at St. Elizabeth University in Ottawa, Ontario, Canada where she earned her certificate in Canon Law. She also spent a semester in La Paz, Bolivia doing research on women for university studies.

While at Saint Louis University, she also directed the doctoral program for the Department of Theological Studies, co-developing a program for certification on Women’s Studies through the College of Arts and Sciences, serving as president of the university’s Women’s Commission for which she initiated and conducted an annual symposium called “Women on Women.”

On Friday, May 8, the day after Sister Joan’s death, Saint Louis University recognized her and Dr. Judith Gibbons with the Founders Award for 2015 for their joint leadership in the founding of the Women’s Studies program at SLU. Their names will be added to a plaque hanging in the Women’s and Gender Studies area in McGannon Hall.

She was the first woman to hold a major office in the Canon Law Society of America and to serve on its Board of Governors. She presented a scholarly paper at the Fifth International Congress on Canon Law in Ottawa, Canada. During her time as associate professor at Saint Louis University, she also served as one of the judges on Missouri’s Inter-diocesan Marriage Tribunal. She authored numerous articles for national publications.

Sister Joan served in leadership of the Adorers of the Blood of Christ, directed young candidates for the sisterhood and spent several years on the community’s Formation Team. She held the position of religious leader at DeMattias Hall, the order’s House of Studies on the campus of Saint Louis University.

Following her retirement to the Ruma Center in 2003, Sister Joan delighted in belonging to a book club with other resident sisters, and discussing poetry with other writers. She carried her love and memory of poetry into her declining years. One of her former high school students reminded her that she had required her class to memorize “The Road Not Taken” by Robert Frost. When her former student recited this poem, Sister Joan chimed in with a few of the words. Her eyes gleamed at the concluding lines:  “. . . I took the one less traveled by/and that has made all the difference.”

Sister Joan is survived by her brothers John (Jack) and Miriam Range and Jerome and Mary Christine Range and members of the ASC community.

She was preceded in death by her parents.

Memorial donations in honor of Sr. Joan can be made by clicking here.

Donations in memory of Sister Joan (Mary Leon) Range may be sent to the Adorers at 4233 Sulphur Avenue, St. Louis, MO 63109. Or you can donate online today.