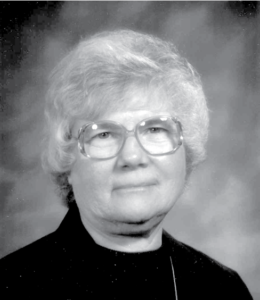 Sister Lucille Kerschen, a lifelong teacher and professed Adorer of the Blood of Christ for 73 years, died Wednesday, April 10, 2019 at the community’s Wichita Center. She was 89.

Sister Lucille, a native of Aleppo, Kansas, was the fourth youngest of 10 children who lost her mother at age seven. She spent her childhood on the family farm. Her older sister Remigia entered the Adorer community before her.

She was a principal of St. Francis of Assisi, Wichita, and St. Nicholas School and St. Peter and Paul School in Kinsley, Kansas. She taught at various Catholic elementary schools in Ellinwood, Kansas; Kinsley, Kansas; McAlester, Oklahoma; and Wichita, Kansas.

In 1990, she was nominated by a former student and was named to “Who’s Who Among America’s Teachers.” A plaque and Bradford pear tree honor her service at St. Joseph School in Wichita.

She was creative, loved to sing, and was an avid reader. She was a devoted New York Yankees fan and loved clowning.

Lucille is preceded in death by her parents and most of her siblings. She is survived by her brother Walter of Wichita; nieces, nephews, friends and former students; and her fellow Adorers.

Donations in memory of Sister Lucille Kerschen may be sent to the Adorers at 4233 Sulphur Avenue, St. Louis, MO 63109 or made online at www.adorers.org

Donations in memory of Sister Lucille Kerschen may be sent to the Adorers at 4233 Sulphur Avenue, St. Louis, MO 63109. Or you can donate online today.