Why We Must March: A Catholic Sister’s Perspective

Adorers of the Blood of ChristJanuary 26, 20173 Comments

Each year, Adorers celebrate our community’s founding on March 4.

This year, March Forth came early, as many Adorers joined the Women’s March – united in spirit — in Washington, St. Louis, Wichita and elsewhere.

We marched for women’s rights; for health care; for economic, gender and racial equality; for environmental justice; for immigrants and refugees; and for an end to the death penalty, among other issues. 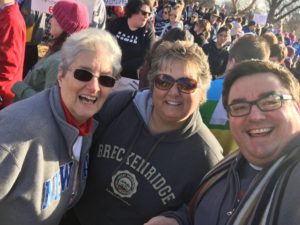 Adorers, coworkers, and friends all came out to march together in Wichita’s Women’s March

As the world watched, Adorers joined in solidarity with other women and men, with varied social justice organizations, in support of our rights, dignity, and freedoms. We recognized that those on the margins of our society needed to see our witness while those in power needed to hear our concerns.

This wasn’t merely a protest against someone, or some cause, but a march for justice, equality and respect for all people. It was an action to create a broader civil discourse among “We The People” about our need to be more engaged, inclusive, respectful and tolerant of others, if we are honest about our desire to be one nation.

As I walked, I was aware of the marchers’ diversity. I didn’t appreciate every poster or chant or speech. But I didn’t judge the sincerity and commitment of their cause recognizing that they, too, were marching with a sense of responsibility and pride for an issue that was bigger than themselves. 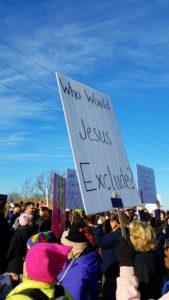 Saturday’s march showed passion and purpose.  It gave witness to a desire to be patriotic and to stand for something not merely to stand against something.

You could feel it in the energy and enthusiasm among us: our willingness to speak with others we didn’t know; to stand with people promoting an issue or cause that we disagreed with. 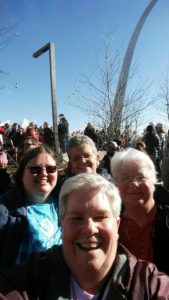 It was a time to admit frustration, pain, disappointment and a sense of being “on the margins,” too.  And, it was a time to understand that simply being present is both healing and strengthening.

People in the crowds were old and young, rich and not so rich, and all colors and life pursuits. While numbers of marchers are still being tallied, it is estimated that as many as 4.6 million people around the world participated Saturday. We are one community.

We will march again — on Saturday, April 29 — in the People’s Climate March, just before President Trump’s 100th day in office. Mark your calendar.

Many have criticized the massive protest on Saturday as unpatriotic or unfair to a new president.

But I draw on the words of a man who would become the nation’s president – written almost a century ago, but just as important today.

Former President Theodore Roosevelt wrote the following in a letter to the editor in May 1918, when the US was embroiled in World War I.

“To announce that there must be no criticism of the President, or that we are to stand by the President, right or wrong, is not only unpatriotic and servile, but is morally treasonable to the American public.”

In that spirit, we will exercise our patriotism and advocacy of “justice for all” whether through marching, letter-writing, or calling or visiting our elected leaders.

Being a part of the Women’s March stirred more passion and energy than can be expressed in words.

3 thoughts on “Why We Must March: A Catholic Sister’s Perspective”