Sister Servant to Others Dies 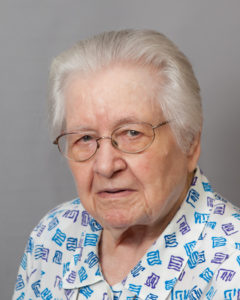 She was born July 16, 1918, at Liebenthal, Kan., to Jacob and Barbara (Schaeffer) Schmidt, the sixth of seven children who lost her father when she was 2.

As a child, she would pray the rosary outside in the summer, followed by a procession of the family’s dogs, cats, chickens and ducks.

Irene was taught by ASC sisters in grade school. She wove blankets for the Works Progress Administration program at La Crosse, Kan.

She entered the Adorers convent in Wichita at age 18 on Sept. 1, 1936, joining three siblings who had entered before her. She was the 19th woman from Liebenthal to join the Adorers.

Her mother, a widow, entered the community of the Holy Heart of Mary in Illinois several months later.

For nearly 40 years, she kept house at the Wichita Center, Sacred Heart College and Academy, at several hospitals, retirement homes, and an archbishop’s residence.

She also supervised central supply at Mercy Hospital in Oklahoma City, did domestic work in Kansas, Oklahoma, New Mexico, and Texas, and worked as a nurse aide at the ASC Wichita center.

She used to say that her life’s work taught her what it means to be a servant to others.

She was preceded in death by her parents; her sisters Sister Martina ASC, Sister Valeria ASC, and Sister Barbara ASC; and her brothers Adolenius, Parenius, and William. She is survived by nieces, nephews, great-nieces, great-nephews, cousins, and her ASC community members.

Sister Irene’s body will be welcomed at the Wichita Center at 2 p.m. on Thursday, July 28. A rosary will be prayed at 6:30 p.m., followed by a wake service at 7 p.m. The Mass of Christian Burial will be celebrated at 10 a.m. on Friday, July 29 in the Chapel of the New Covenant with Father Tom Welk presiding. She will be buried in the community cemetery.

Memorials in her honor may be made online by clicking here or sent to the Adorers of the Blood of Christ, U.S. Region, Mission Center, 4233 Sulphur Ave., St. Louis, Mo. 63109.

Donations in memory of Sister Irene Schmidt may be sent to the Adorers at 4233 Sulphur Avenue, St. Louis, MO 63109. Or you can donate online today.