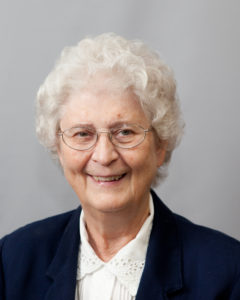 Sister Mary Renee Kirmer died quietly Wednesday, Sept. 20, 2017. She was 81 and had been a professed Adorer of the Blood of Christ for 57 years.

She was born near Spearville, Kan., on Dec. 28, 1935, the sixth child of Frank and Albina (Penka) Kirmer, and baptized at St. John the Baptist Church.

Her family later moved to Dodge City, Kan., where she played softball, tennis and basketball. She was valedictorian of her 1953 Dodge City High School graduating class, and later worked there for five years as the principal’s secretary.

She did most of her ministry in Wichita as director of aspirants, high school teacher, Sacred Heart College director of records and admissions, provincial councilor, pastoral team member, pastoral associate, and director of several diocesan planning committees.

She served on the boards of Villa Maria in Mulvane Kan.; St. Joseph Villa in David City, Neb.; Wichita Diocesan Board of Education and Newman University.

Renee was pastoral associate at St. Mary’s Cathedral for 19 years and was active in the parish’s committees, classes and events. As her farewell gift, the parish bought her a plane ticket to Rome so that she could attend the canonization of the Adorers’ founder, St. Maria De Mattias, in May 2003.

In 2008, she took on the ministry of welcoming women who were considering a vocation with the Adorers. She also helped sisters with budgeting, and volunteered at Newman University’s registrar’s office, Botanica and the Lord’s Diner, and served as a board member of the Center of Hope.

Preceding her in death were her parents, her siblings Norbert, Herman, Margaret, Magdalen, and Berneda. She is survived by her sisters, Anita and Carol, numerous nieces and nephews and her ASC community members.

You can make a donation in honor of Sister Renee by clicking here.

Donations in memory of Sister Mary Renee Kirmer may be sent to the Adorers at 4233 Sulphur Avenue, St. Louis, MO 63109. Or you can donate online today.