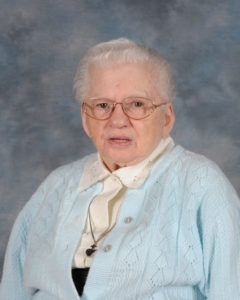 Sister Mary Evelyn Di Pietro, ASC, died Monday, July 23, 2018, in Columbia, Pennsylvania. She was 97 and had been a professed member of the Adorers of the Blood of Christ for 74 years.

Beatrice Evelyn Di Pietro was born, along with her twin brother, Philip, on July 4, 1921 in Belmont, Massachusetts. They were the third and fourth of 10 children of Italian immigrants Ciriaco and Evelina (Cancellieri) Di Pietro.

She came to know the Adorers through her aunt, Sister Maria Cancellieri, ASC, who entered the community in Rome before migrating to the U.S.

Sister Evelyn said she wanted to become an Adorer in order “to help people whatever way I was asked to do so.”

“[I wanted] to help people whatever way I was asked to do so.”

Beatrice Evelyn entered the community at St. Joseph Convent, the Motherhouse of the former Columbia Province, on August 21, 1942. She made first vows on August 12, 1944, and final vows five years later.

She graduated from St. Joseph Academy High School in Columbia, Pennsylvania, studied at the Precious Blood Teacher Training Institute there, and St. Joseph College in Calumet, Indiana. She also studied at Georgia University, and Millersville University in Millersville, Pennsylvania. She earned a bachelor’s degree in education from Youngstown University, Youngstown, Ohio, and an elementary education teaching certificate from the state of Ohio.

She served her Adorer community as local coordinator in Chicago and Steelton, as administrator at the motherhouse, and on the staff at the Precious Blood Spirituality Center, Columbia.

She retired to the motherhouse in 2002, and to St. Anne’s Retirement Community in 2008 where she lived Mission in Later Life until her death.

Sister Evelyn was preceded in death by her parents and brothers, Michael, Alfonso, Philip, Joseph, Anthony, and Gerald; her infant sister Mary Ann, and her other sister, also Mary Ann. She is survived by her brother, Louis, of Belmont, Massachusetts, nieces and nephews, and her sisters in community.

There will be a prayer service and viewing at 9:30 a.m. on Saturday, July 28, 2018, in the chapel at St. Anne’s Retirement Community. Mass of Christian Burial will follow at 11 a.m., with Father Norman Hohenwarter, chaplain, officiating. Burial will be in the community cemetery.

Donations in Sister Evelyn’s honor can be made here.

Donations in memory of Sister Mary-Evelyn Di Pietro Dies may be sent to the Adorers at 4233 Sulphur Avenue, St. Louis, MO 63109. Or you can donate online today.