Remembered for Her Love of Teaching and Pastoral Care 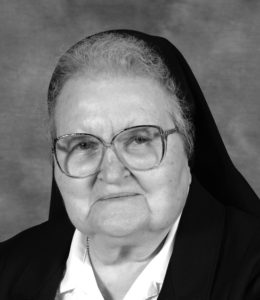 Sister Helen (Herman Jospeh) Panci, ASC, died on Monday, January 14, 2019 at St. Helene’s Retirement Community in Columbia, Pennsylvania. She was 94 years old and had been a professed member of the Adorers of the Blood of Christ for 78 years.

Sister Helen taught elementary and middle school for 32 years in Pennsylvania, North Carolina, Georgia, South Carolina, and Ohio. In between her years of teaching, Sister Helen spent a combined 15 years nursing at various hospitals before switching pursuing her CPE later in life. Her pastoral care work took her to Slovak where she combined her love of teaching and pastoral care for three years.

Fortified by the love and support of her birth family, her foster family, and the family of the Adorers, Helen was able to impact countless lives in her long-standing ministry as a teacher, as well as in service as sacristan, domestic worker, nursing care volunteer and missionary. In the years that followed Sister Helen engaged in domestic work before entering living mission. It was in 2010 that her deteriorating health took her to St. Anne’s Retirement Community in Columbia, Pennsylvania.

Sister Helen is survived by her nieces and nephews of her birth family and of her foster family, all of whom have stayed in contact with her.

A Mass of Christian Burial will be held in the Chapel of St. Anne’s Retirement Community. Monday, January 21, 2019, at 11:00 a.m.  Rev. Norman Hohenwarter, Celebrant.  Burial will follow in the Ruma convent cemetery. A brief service and recitation of the Holy Rosary will begin at 9:30 a.m.

Donations in memory of Sister Helen Panci may be sent to the Adorers at 4233 Sulphur Avenue, St. Louis, MO 63109 or online at www.adorers.org “Memorial Donations.”

Donations in memory of Sister Helen Panci may be sent to the Adorers at 4233 Sulphur Avenue, St. Louis, MO 63109. Or you can donate online today.