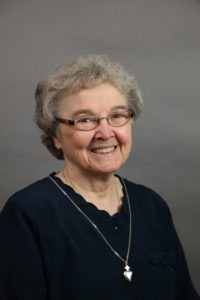 Sister Bertha (Mary Austin) Fischer, ASC, died Saturday, Sept. 1, 2018, in St. Louis. She was 83 years old and had been a professed member of the Adorers of the Blood of Christ for 61 years.

Sister Bertha was the fifth of 12 children of Joseph, Sr. and Elizabeth (Tebbe) Fischer from St. Rose, Illinois.

She received her undergraduate and graduate degrees in French, minoring in other languages, which kick-started a lifelong interest and ministry in languages.

She began Italian studies in 1985 in Rome, in preparation for her work as a translator for English-speaking Adorers. She served in Rome as a member of the General Council or Leadership Team for the entire congregation from 1987 to 1991. Interrupted by a several-month stay with Adorers in La Paz, Bolivia, and a four-month sabbatical, she returned to Rome to serve as a translator from 1992 to 1996, and again from 1999 to 2006. Altogether, she was in Rome for 17 years. 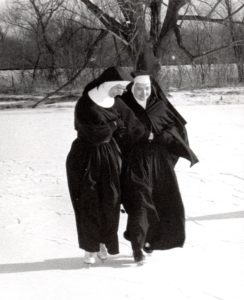 Sister Bertha, on the right, ice skates in Festus, Missouri.

Sister Bertha also loved music, and organized liturgical music, and sang in the choir at the Ruma Center, the motherhouse in Ruma, Illinois. She also sang with the St. Louis Symphony Chorus.

Sister Bertha was preceded in death by her parents, her brothers Charles and John, sister-in-law Donna Fischer, brothers-in-law Clarence Schumacher and Paul Fiedler, and aunts in the ASC community, Sister Priscilla Fischer and Sister Veronica Tebbe.

She is buried in the Ruma Convent cemetery.

Donations in memory of Sister Bertha (Mary Austin) Fischer may be sent to the Adorers at 4233 Sulphur Avenue, St. Louis, MO 63109. Or you can donate online today.