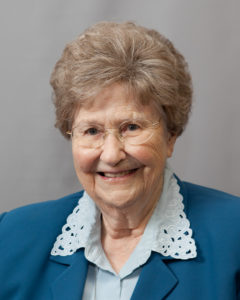 Her teaching career of 30 years began at St. Joe, Ost, Kan., extended to schools in New Mexico and Oklahoma, and often included being the principal. She also served as superintendent of Catholic Schools in the Dodge City (Kan.) Diocese.

Sister Sylvana was introduced to working in health care when she was missioned early in her religious life to Stillwater Oklahoma Municipal Hospital. After many years of teaching elementary school, she completed an executive development program at Saint Louis University Hospital, and then began a 13-year ministry as administrator of St. Mary’s Hospital, Enid, Okla.

She served the ASC community as scholastic director, councilor on the leadership team and coordinator of hospitality. She traveled to Alaska in1967 with another Adorer to research the feasibility of starting an Alaskan mission.

She retired to the Wichita Center in 2010 where she appreciated the time for praying, reading, listening to classical music, playing cards, and visiting with friends and relatives.

She was preceded in death by her parents, her sister Margaret, and her brothers Henry, Bernard, Joseph, John, Raymond and Clarence. She is survived by sisters-in-law, many nieces and nephews, great nieces and great nephews, and her ASC community.

Sister Sylvana’s body will be welcomed at 2 p.m. Wednesday, Aug. 31, at the Wichita Center, followed by a wake service at 7 p.m. The Mass of Resurrection will be celebrated at 10:30 a.m. on Thursday, Sept. 1, in the Chapel of the New Covenant with Father Robert Schremmer, Vicar General of the Dodge City diocese, presiding. Burial in the community cemetery will follow.

Donations in memory of Sister Sylvana Schulte may be made online by clicking here or sent to the Adorers of the Blood of Christ, U.S. Region Mission Center, 4233 Sulphur Ave., St. Louis, MO 63109

Donations in memory of Sister Sylvana Schulte may be sent to the Adorers at 4233 Sulphur Avenue, St. Louis, MO 63109. Or you can donate online today.