Each of Us Can Do Something to Avert Climate Change 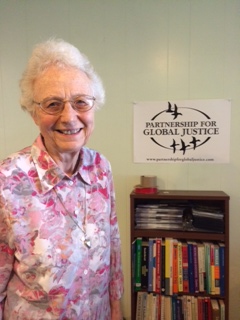 Sister JoAnn is executive director of the Partnership for Global Justice, a coalition of individuals and groups that educate and advocate for justice, oppressed people and Earth.

It’s been nearly a month since President Trump announced the U.S. would withdraw from the Paris Climate Accord, which is so important for the life of all of us and of future generations.

The agreement represents the first time in our lifetime that nearly every nation has offered a voluntary plan to help save the planet by cutting carbon and methane emissions.

At first, I was very disappointed by President Trump’s decision to withdraw U.S. support. Then, something unexpected happened. His announcement energized groups, individuals, even U.S. states and cities, to speak and act in support of the Paris Agreement.

I deeply regret that President Trump’s action has set us at odds with the rest of the world, but I am amazed and inspired by the actions and sentiments of so many others to take responsibility to sustain the planet.

However, I fear that relinquishing world leadership on climate change has cost the United States its credibility with other countries.

Many of the best and brightest may choose to engage with countries that are filling the leadership gap.

You may ask what groups or ordinary citizens can do to avert the trajectory of climate change. Here are a few ideas: