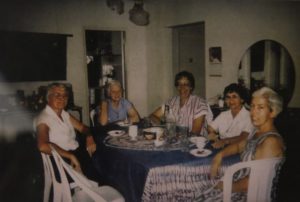 Five missionaries in their Liberia home

We go in twos to try to understand the impact of the five.

Two Adorers, two ASC Associates and two Newman University students are traveling to Liberia on a pilgrimage that marks the 25th anniversary of the death of our five missionary sisters in October 1992.

Two were ambushed on a road they traveled on Oct. 20 that year. Three others were shot to death three days later in front of their convent.

For long-suffering Liberians, it was another brutal week in Liberia’s long civil war.

Our six pilgrims, flying from points across the U.S., will meet Friday afternoon in Amsterdam and arrive late Friday night in Liberia. They will stay at a guesthouse not far from a Catholic church that takes its name from our late sisters’ experience: “Holy Martyrs.”

One of the pilgrims, Sister Raphael Ann Drone, who served 20 years in Liberia, was around for the church’s naming back in the day. She said that the name originally was to have been “Five Holy Martyrs,” but that the Adorers insisted that it be simplified to “Holy Martyrs.” The change was a nod to the hundreds of thousands of Liberians who died in the war, she said. 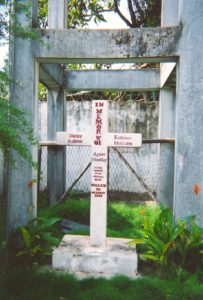 Over the next week, the six pilgrims will visit the people who knew our martyrs: Sisters Barbara Ann Muttra, Mary Joel Kolmer, Shirley Kolmer, Kathleen McGuire and Agnes Mueller, and visit the places where they worked, taught, provided health care, and otherwise lifted the people of a country Adorers had served since January 1971.

The killing of our five sisters abruptly ended the Adorers’ ministry in Liberia, although a subsequent visit in the late 2000s reignited our relationship with the country. Sister Raphael Ann returned in 2010-12, and again briefly in 2014, but had to pull out because of the Ebola outbreak.

Two Newman University students (Khoi Nguyen, Erin Schueller) on either side of ASC Associate Donna Luetters getting ready to fly to Liberia

A seventh traveler, ASC Sister Therese Wetta, will be assessing the possibility of opening another Adorers missionary house in Liberia. She will meet with local bishops among others before reporting to the congregation.

Each of the pilgrims got a sending-forth, or blessing before they left. Early Thursday, about 20 Adorers at the Ruma (Illinois) Center gathered around Sister Rachel Lawler to bless and hug her, and wish her well.

Sister Rachel, who had spent many years in Liberia, carried her personal luggage as well as an extra suitcase filled with sundresses she had made for girls in Liberia.

Meanwhile, Newman University freshman Erin Schueller was nervous about the long flight and excited to get to Liberia.

“It hasn’t hit me yet that I’m traveling to another continent,” she said from Atlanta’s airport. “NU (Sophomore) Khoi (Nguyen) and I just finished up finals this week. We’re still stuck in the mindset of school. Once we get there, it will hit me.”

We will post the pilgrims’ thoughts and impressions here or on our Facebook page as the trip proceeds. Stay tuned.