The Adorers of the Blood of Christ, U.S. Region, an order of Catholic sisters with regional offices in St. Louis, will mark the one-year anniversary of the dedication of a cornfield chapel that symbolizes their opposition to construction of a natural gas pipeline on their property in Pennsylvania.

Last year, the Adorers agreed to a request from the grassroots coalition, Lancaster Against Pipelines, to install and use the handcrafted, portable prayer chapel on their land, in hopes of drawing people of all faiths to prayer and reflection about just and holy uses of land. 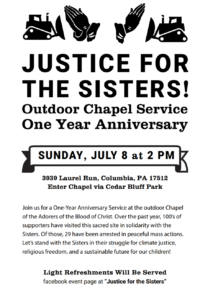 A prayer service and reflection starting at 2 p.m. EDT on Sunday, July 8 in the cornfield (3939 Laurel Run, Columbia, Pennsylvania, 17512) and followed by light refreshments, also will mark the one-year anniversary of the Sisters filing a federal civil rights lawsuit in their years-long effort to challenge construction of a natural gas pipeline underneath a strip of land they own in West Hempfield Township, Lancaster County, Pennsylvania.

Invoking the Religious Freedom Restoration Act, the Sisters last July sued Williams/Transco, the company that wants to lay the pipeline, as well as the Federal Energy Regulatory Commission, or FERC, which approved the company’s request to construct, maintain and operate a pipeline on this land for the Atlantic Sunrise Project.

The Adorers have argued that installation of a fossil fuel pipeline on their own property, against their will, constitutes a violation of their deeply held religious convictions about the sanctity of Earth. Their convictions are laid out in an October 2005 Land Ethic that honors the sacredness of Earth and all of creation and treasures land for its beauty, sustenance and legacy. They actively seek to reduce reliance on climate-destroying fossil fuels, and strongly oppose environmentally destructive practices such as hydraulic fracturing.

Last year, a U.S. District judge for the Eastern District of Pennsylvania dismissed the Sisters’ religious freedom lawsuit, citing a lack of jurisdiction to hear the case. The Adorers appealed that decision to a three-judge panel in the 3rd Circuit Court of Appeals in Philadelphia, which heard arguments in January, but has not yet issued a decision.

If the three-judge appeals panel rules in favor of the Adorers on this jurisdictional matter, the case would be remanded to the District Court for consideration on the merits of their religious freedom challenge, which the Sisters believe to be clear and well-founded.

Learn more about the Adorers’ efforts to oppose the pipeline >>